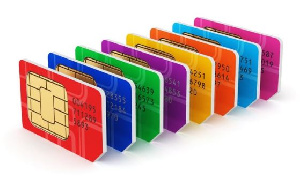 The Human Rights Division of the Accra High Court on Thursday, 9 December 2021, struck out an interlocutory injunction against the ongoing re-registration of the SIM cards after the applicant, Mr Francis Kwarteng Arthur, through his legal counsel, led by Dr Justice Srem Sai, withdrew the application.

The private citizen, who is also a lawyer, sued the National Communications Authority (NCA) and the telecommunications companies over the re-registration exercise.

He prayed the High Court to stop the collection of subscribers’ personal data for the re-registration exercise.

He also sought the interlocutory injunction to halt the process until the final determination of the case.

The suit put the Attorney General on notice.

Mr Arthur filed the case on Monday, 22 November 2021 is asked the court to “make an order directing at the 1st Respondent/Respondent to suspend its notice to Mobile network operators directing, instructing or requesting them to procure, store or use the Applicant’s personal information (including the fingerprint of other subscribers), pending the determination of the issues in the originating motion on notice”

Also, he wanted “any order that the honourable court may deem fit under the circumstances for the protection of the fundamental human rights and freedom of the public at large.”

During the hearing on Thursday, 9 December 2021, however, his lawyer withdrew the application for an interlocutory injunction after the court said it could not stop the ongoing re-registration exercise pending the hearing of the injunction case.

The lawyer of the NCA, Mr Gary Nimako Marfo, argued that the interest of Ghana’s population of more than 30 million people could not be sacrificed for the applicant.

The court, presided over by Justice Barbara N. Tetteh-Charway, said it could not restrain the government from stopping the ongoing exercise pending the outcome of the injunction case and noted that the interest of the general public was also paramount.