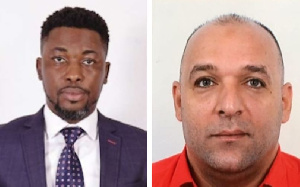 Social Commentator Kwame Asare Obeng known popularly as A Plus has disclosed that Hassan Zein after suing him called some persons at the Jubilee House to beg him not to disclose his secrets on social media.

Hassan Zein sued Kwame A Plus for defamation and further asked the court to bar him from publishing anything about him.

But the suit didn’t deter Kwame A Plus who in a post on Facebook disclosed some ills Hassan is engaged in and the fact that he had swindled an Arabian who will be in Ghana to deal with him in the coming days.

Kwame in a separate post disclosed that Hassan Zein called some persons at the flagstaff house to beg him to a ceasefire.

A Plus insists he will report Hassan to the Inspector General of Police and provide evidence to support all the allegations he has made against the Lebanese.

He said he is not moved by suits because a number of persons have sued him but did not see the suit through because they had no case.

Watin Isifu no see for gate? They sue me and post it on social media but fail to follow the process. Hon. Ursula Owusu quietly withdrew her injunction application but failed to tell her followers. As for her, she is my sweetheart, so I don’t want to disrespect her. It is that her lawyer who misled her. That guy can sell his brother for coins.

The day the media reported some fake news that I’ve apologised to Abu and Asenso was the beginning of the escalation of my issues with NPP. Those brothers have respected themselves for sometime so I’ll reciprocate it. I’ll maintain a very good relationship with them till they decide to make a move. Then I’ll go back to factory settings and face them. They know me.

As for Asabee he is my uncle. I want him to win the NPP chairmanship position so I’ve decided to give him some peace. I’m sure by now it has become very clear to him that if he is a stubborn uncle, I’m a crazy nephew He fought Rawlings and won so he wanted to fight Kwame A Plus. I showed him something “small in Atiwa” Wofa, Rawlings is flesh and blood. Kwame is a spirit. Grandson of Ama Nyame and Ɔbosomfoɔ Kwaku Duku of Kwasi Adaɛ

Hassan, you are just chicken change!!! After going to court you called people at flagstaff house at 5am to beg for you. I’ll only accept your apology when we meet at the police station. My lawyer is working on the petition to the IGP stating clearly with evidence all you crimes in this country.

Related Topics:A PLUSLEBANESE
Up Next