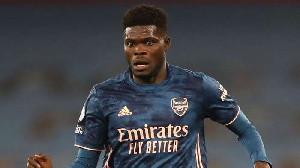 Arsenal manager Mikel Arteta has said the club supporters will soon see the best of Thomas Partey whose spell with the gunners has been plagued by injuries.

Partey, who joined the Gunners last summer from Atletico Madrid for £45m, has struggled to stay in shape in the ongoing campaign.

The diminutive midfielder sustained an injury in December 2020 when Arsenal played Tottenham Hotspur, a game the Gunners lost by two goals to nil and did not feature for the club until mid-January.

Having returned from injury, he has been enjoying a streak of games and according to the manager, he is convinced that Arsenal fans will see the best of him in England soon.

Reacting to Partey’s comment that he is approaching his best, Arteta said, “I think so.

“In terms of pace, he has struggled a bit in recent weeks because he has not had enough training or enough preparation because the league is very demanding.

“But you can see his quality; you can see the presence and the special qualities that he brings to the team when he’s on the field.

“I think it’s just a matter of playing more games, getting some chemistry and understanding with your teammates and getting as fit as possible,” He said.