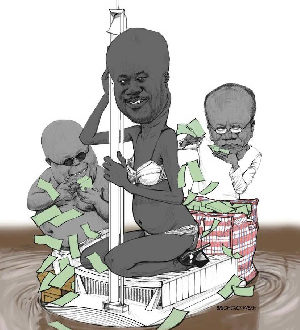 Artist causes a stir with Akufo-Addo and Ofori-Atta sketch

Ghanaian artiste, Bright Ackwerh, has shaken the political status quo of the nation with a sketch that describes the current state of the nation.

The artwork which was shared on the artist’s Instagram account was captioned “NATIONAL CATHEDRAL CLUB. Nothing to see here just a couple of Christian show boys making it rain, excuse the pun, in this club.”

The sketch captures shirtless Akufo-Addo and Ofori Attah spraying stacks of cash on an equally half-naked woman bearing a resemblance to the president.

Shockingly, the sketch also spots the half-naked woman holding onto the National Cathedral for her dear life while the building drowns in the flood as she entertains the president and Ken Ofori-Atta who shower her with lots and lots of money.

Although the art explains itself quite clearly, it follows some statements made by some Ghanaians chiding the government over the release of ¢25 million to the National Cathedral Secretariat as additional seed money for the construction.

A letter, signed by the Minister of Finance, Ken Ofori-Atta, to the Controller and Accountant’s General, directed that the money be credited to Ribade Limited, for part payment of outstanding claims.

The translation of the art as seen in the article may be explained differently according to whoever views it.

Previous VIDEO: Patapaa makes another allegation against Zionfelix
Next Wealth amassed by Sir John within three years was too much – Obiri Boahen