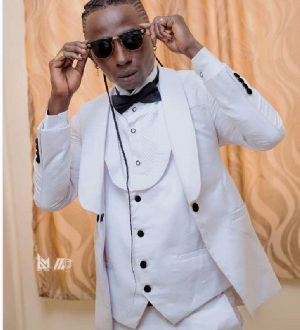 Singer Patapaa Amisty has alleged that Zionfelix might be having an affair with his wife, Liha Miller following his recent interview with her in Germany.

According to the ‘One Corner’ hitmaker who is reported to be facing problems in his less than two years of marriage with his German wife, he has heard rumours of a secret affair between the blogger and his partner.

Patapaa in an interview on SammyKay Media alledged that people have tipped him on the affair but he never gave importance to it. However, the single decision of Zionfelix to visit, interview and spend time with his wife in Germany without prior information confirms that all the rumours are true.

He expressed his disappointment in Zionfelix for fuelling the challenges in his marriage which he tried to keep private.

Patapaa failed to confirm whether or not he has separated from his wife saying that his marriage is ‘family matters’ and doesn’t wish to bring it into the public domain.

“Right from their interview in the car, he went with her to eat ‘fufuu’. I want to find out where Zion slept after that. Why will you chat with a married woman without informing her husband? Why would you chat with her in secret?… when he heard that we had separated he took the opportunity to get into the scene, that is what I think. He should have called me or my manager to seek permission or at least inform me,” he quizzed.

Speaking on the alleged affair, an angry Patapaa furthered that “Zion is a womanizer, the evidence I have against him is the video that captured him in my wife’s car.”

The singer has threatened to take legal action against the blogger for interviewing his wife without his consent.