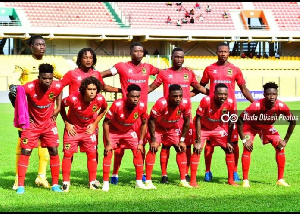 Kumasi Asante Kotoko Sporting Club has signed a GHC 1.3 million partnership deal with Betika, one of the fastest-growing betting companies in Ghana.

The two-year contract deal is expected to benefit the two organizations in a reciprocal manner.

Mr. Ohene Bampoe Brenya, Spokesperson for Betika Company speaking to the Ghana News Agency (GNA) after the signing ceremony said, Asante Kotoko would be receiving Ghc 630,000 per annum in cash and in kind.

The club would also be receiving footballs, nets, and other sporting equipment during the contract period.

“The firm which aims to invest in the youth by nurturing talent through sports, arts, and culture, also seeks to improve the team’s performance in the Premier League and scout for talent from grassroots across the country”, he told the GNA Sports.

As part of the agreement, Asante Kotoko Sporting Club has now declared Betika Company as the official betting partner, whilst the Company becomes an official sponsor for the sporting club.

Ms. Michelle Kwame, Betika’s Head of Business said, the company was overwhelmed with the response from the porcupine family.

“We thank you for accepting us and we are looking forward to more engagement with the players and the fans.

We’ve come on board to help project the image of the club and make the fans happy.

As a company, the success of Asante Kotoko is our success and we are certainly looking forward to the opportunities ahead of us with this partnership”. She stated.

Ms. Kwame however said Betika would ensure responsible betting amongst people who patronise their services.

The colourful event which was held at the Golden Bean hotel saw many football legends, supporters and current players of the club register their presence.

Nana Yaw Amponsah Chief Executive Officer of the Asante Kotoko said the club was very glad to see this partnership with Betika finally coming to pass.

He said the management and the players were happy with the strides taken by Betika over the last few months to ensure a seamless partnership.

“The porcupine symbolises the strength of the Ashanti Kingdom, and with you on board, we know our partnership will be stronger together to conquer many more territories.

The porcupine warriors believe that this partnership will go a long way towards not only easing the club’s financial obligations but also increasing the leagues’ monetary incentive”, he stated.

What has happened to Partey and other African stars at Arsenal?