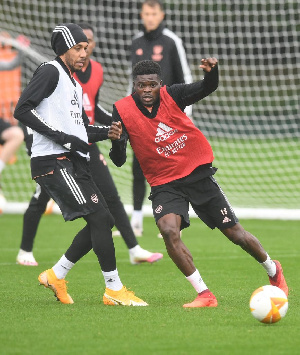 Monday night appeared to be the nadir for Arsenal’s African contingent as an already frustrated fan base snapped.

The Gunners were beaten 2-1 by an Everton side that went into the game at Goodison Park winless in their last eight games and one that had not found the back of the net twice in one game since October.

Defeat on Merseyside was the third successive away loss for Mikel Arteta’s men, and the Africa.

Thomas Partey was dominated in the middle of the park, Pierre-Emerick Aubameyang, dropped from the starting line-up, came on to miss a presentable opportunity, Nicolas Pepe failed to come off the bench for a fifth Premier League game on the trot and Mohamed Elneny did not come off the bench.

When Arsenal were due to face Leicester City in October, the club captain’s goalscoring was outdoing his opening 18 months in North London and fell just shy of that impressive 2019/20 campaign.

However, since that game at the King Power Stadium, the Gabon striker has not pulled up trees. The ongoing six-game run without a goal is the experienced frontman’s longest drought since 2014.

While he has not covered himself in glory of late, the broader creativity problems mean quality chances are in short supply, evidenced by the fact that the Gunners sit 14th in the Premier League for big chances created.

With Eddie Nketiah and Alexandre Lacazette’s futures up in the air, it is unlikely that Arsenal will lose three center-forwards in the next months. Some fans and a few pundits have called for the Gunners captain’s departure.

Could the Arsenal issues affect Auba at Afcon?

This remains to be seen, but it is far from ideal for the Panthers who are looking to navigate a tricky group containing Morocco, Partey’s Ghana and Comoros, hoping an off-form captain helps them progress from the group stage for the first time since hosting the tournament in 2012.

An injury in the Mind Series pre-season friendly with Chelsea put paid to the Ghana star’s decent-to-good off-season and the West African had to bide his time before making an impact in his second year in England.

Since Partey returned, there have been some flashes of his undoubted quality — evidenced by performances against Burnley and Tottenham Hotspur — but this has been few and far between.

The former Atletico Madrid midfielder also admits he has been far from his best for the club, strikingly scoring himself four out of 10.

Owing to the investment they made just over a year ago, the Gunners are unlikely to let the Ghana man leave so soon.

Probably. With the lack of form or rhythm in North London, the Black Stars may well get a player suffering a dip in form and confidence at next year’s continental showpiece.

Pepe started four of Arsenal’s opening five games but has played only one game from the off from the recent 10.

The Ivory Coast winger has been an unused substitute in the last five matches on the trot, with Monday’s snub at Everton especially damning.

Having ended last term on a high, 2021/22 has been miserable for the former LOSC Lille wide attacker.

Reports are growing that Arsenal want to cut their losses on a player who signed for a record fee in 2019.

Definitely. With Wilfried Zaha’s international future uncertain, players like Pepe are expected to give their best for Ivory Coast’s ambition to claim the continent’s biggest prize.

The North African has started only one game all season — in Arsenal’s defeat by Manchester United at the start of the month — having been on the periphery since August.

With Partey, Granit Xhaka and summer signing Albert Sambi Lokonga now seemingly ahead of Elneny in the pecking order, the Egyptian appears to be the club’s fourth-choice central midfielder which is reflected in his four substitute appearances and one start.

Strong reports are linking the North African with a move to Newcastle United in the January window.

While a lack of game time is not ideal, the Arsenal midfielder is not Egypt’s talisman and a lack of match sharpness is not expected to be fatal for the Pharaohs in the New Year.