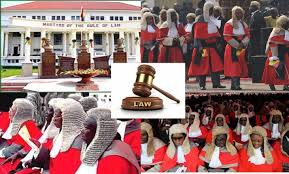 The National Organizer of the Liberal Party of Ghana (LPG), Yaw Asani Tanoh has  linked the Judicial system of Ghana to religious groups Muslims.
He said, Ghanaian Judges act like a Muslim who have forgotten God’s judgement.
He indicated that the Judges pass judgement for the benefit of their affiliated political parties and deny justice for ordinary people as if they are in paradise.
” They should amend their ways of doing things, especially the Judicial, they should amend their ways …… oh! there is judgement if you don’t know. I want to believe that one way the other they are not christians, they may be Muslims” Asani Tanoh said this on Neat FM’s Me Man Nti programme when commenting on supreme court ruling on E-levy implementation.
The Supreme Court on May 4th, 2022 dismissed an interlocutory injunction application by three Members of Parliament (MPs) which sought to temporarily put the implementation of the electronic transfer levy (E-Levy) on hold.
“In our opinions, greater hardship will be caused to the state in meeting its developmental obligations to the people,” the court held.
According to him, the supreme court ruling is politically motivated.
” Do an introspective analysis of yourself and ask yourself if you were not assigned by someone to do what you are doing, ask yourself the jugement you have passed for the interest of a particular party instead of the ordinary people, tomorrow can you give answer to God” Asani Tanoh stated.
Source: Ghanaweb.mobi/Elvis Anokye
ACT ano Asani GHANAIAN JUDGES LIKE muslims YAW 2022-06-09
Elvis Anokye
Share