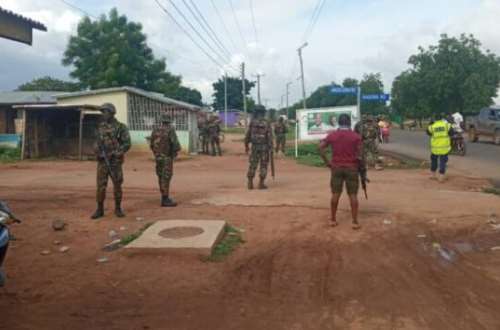 Bawku: 5 arrested over killing of four persons in renewed gunfight

Five persons have been arrested by the Bawku divisional police command in the Upper East Region in connection with renewed ethnic conflict that have claimed the lives of four persons.

Even though the police are yet to unravel the cause of the disturbances, sporadic gunshots ensued among ethnic groups in Bawku on Monday, May 9, 2022.

“Between 8:30pm to 9:00pm, there were sporadic shootings all over the place in Bawku and the police deployed more men together with the military to calm down tempers.”

“But it calmed down for a while and at 1:20am on May 10, 2022, they started the sporadic shooting again and unfortunately a house was attacked and three persons; Sulemana Eliasu, age 41, Moro Duada, age 66 and Barikisu Duada, age 25 were killed”.

He indicated that, the bodies of the deceased were released to their families for burial.

Supt. Akabati further stated that, at about 6:30am on Tuesday, May 10, 2022, another house was attacked at Batelime and one Amidu Seidu, age 71, was also killed.

Supt. Akabati stated that, five persons have been arrested in connection with the disturbances and will be arraigned soon.

The suspects have been sent to the Upper East Regional police command in Bolgatanga where they will be put before court.

Mr. Akabati also indicated that, one locally-made pistol and one BBA cartridge were retrieved during the disturbances.

He added that the area has returned to normalcy and assured that, the police and military in the area remain committed to protecting life and property.

Tags 5 arrested four gunfight IN KILLING OF over PERSONS renewed

Previous Rihanna to launch her beauty product line in Ghana, seven other African countries
Next Four Ghanaian business moguls who own football clubs