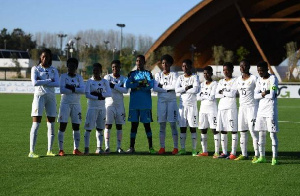 Ghana’s FIFA U-20 Women’s World Cup qualifier against Zambia has been moved from Accra to Cape Coast.

The 2022 FIFA World Cup qualifier which was originally scheduled for the Accra Sports stadium will now take place at the Cape Coast stadium on Saturday, December 18, due to renovation works currently going on at the national stadium.

The Black Princesses drew goalless with their Zambian counterparts in the 1st leg and win on Saturday will take them through to the next round of the competition.

Coach Ben Fokuo’s side will move their camp base from Prampram to Cape Coast on Monday, December 13, to continue with their preparation for the second leg qualifier.

The FIFA U-20 World Cup is slated for Costa Rica next year.

2021 AFCON: Ghana to face Algeria on January 5 before start of tourney in Cameroon