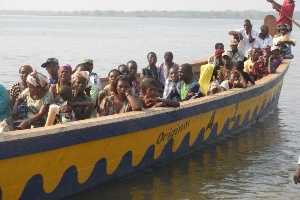 Some 40 people are feared dead on the Volta Lake after a boat carrying them capsized due to a storm.

The boat was travelling across the Lake from Tongor-Dzemeni in the South Dayi District of the Volta Region to Havorkope in the Kwahu Afram Plains North District of the Eastern Region, when it encountered the storm leading to the accident.

Mr John Kofi Abbery, an elder at Tongor-Dzemeni, who visited the scene immediately after the incident, said close to 30 bodies were retrieved from the river at the time of his visit and that most of the victims were women and some students travelling to their parents for the Easter break.

“If you are not a man you can’t see the bodies, they are many. This is painful,” he said.

Miss Golo Doh Benedicta, a 16-year-old survivor, who spoke to the GNA via phone from Havorkope, said the incident occurred at about 1600 to 1700 hours on Thursday, April 14.

She said the outboard motor of the boat went off and water began to enter when the storm hit.

“Some of us were shouting, others were crying, wailing and calling for help from God because we saw the boat was sinking,” she said, describing the incident as horrific.

She said she jumped onto one of the boards of the boat and was floating on the surface of the water before another boat came to her rescue and some other passengers.

The boat was carrying fertilizers and drinks among other goods, she said, adding; “I survived by grace, I really saw my death, I couldn’t do anything. I was afraid and crying but I thank God for saving my life.”

Mr Mawuta Kpetigo, a teacher at Havorkope, who also confirmed the incident, said search operations were ongoing to retrieve the rest of the bodies.

“My elder sister is also among the victims, but her body hasn’t been found yet, so we are still looking for her and other bodies,” he said.

More than distraught 500 members of the community were gathered at the shore while the search continued, Mr Kpetigo said.