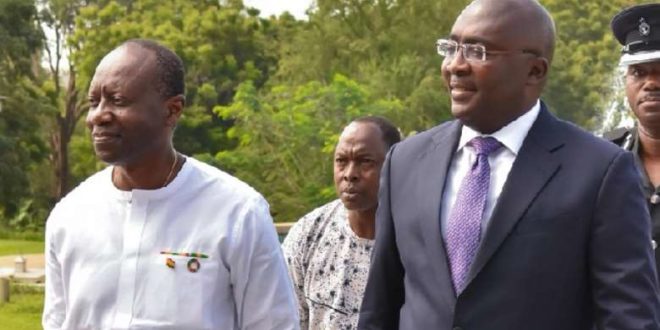 According to Boadi, Ofori-Atta did not give any justification for his comments after the April 7 State of the Economy lecture where he hailed Bawumia’s delivery.

“He, Ken Ofori-Atta’s reputation has plummeted, he has no gravitas to go and tell party members that they should vote for Bawumia. The NPP’s problem is the two of them, ask ordinary people on the street and Ken is popular for all the wrong reasons,” he stressed on Abusua FM last week.

“In my opinion, his comments are empty and unjustified. I don’t know his power and influence in the party, so much so that he is coming to tell us that Bawumia’s delivery shows he can succeed Nana. How can Bawumia succeed Nana?” he quizzed.

Boadi is known to be a strong pro-Alan Kyerematen activist. He stressed that Alan was going t be the NPP’s flagbearer com rain or shine and that they won’t allow the opposition NDC to ‘trick’ party faithful into electing anyone else.

What did Ofori-Atta say:

On the sidelines of the April 7 State of the Economy address delivered by Bawumia in Kasoa, the Finance Minister said:

“I think it lays out very distinctly what we have done as a party and the capacity to take us to the transformation level that we are talking about.

“Clearly for me, also makes it very evident to Ghanaians that we have the type of person who can lead after Nana Akufo-Addo leaves and that is reassuring,” he told Metro TV on the sidelines of the event Thursday.

Bawumia is seen as a leading candidate in the race for the New Patriotic Party flagbearership slot. If he is to contest, he is likely to come up against the likes of Alan Kyerematen, Joe Ghartey and Boakye Agyarko.

Previous This Week On Twitter:Samini and Stonebwoy to perform in Kwahu, Lynx at 15 and many more
Next Boat capsizes on Volta Lake, 40 feared dead