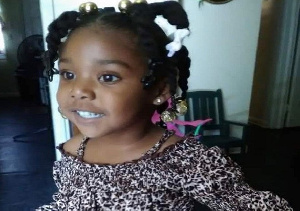 Investigators in Birmingham, Alabama, have found the lifeless body of Kamille McKinney – the three-year-old, who went missing more than a week ago.

Affectionately called ‘Cupcake’, Kamille vanished outside a birthday party on October 12, only for her remains to be found 10 days later in a garbage bin after investigators combed through about 12 tons of trash collected in and around Birmingham area for days.

“Our investigators, along with the FBI, have worked tirelessly, 24 hours a day, to locate this young child and bring her back home and to hold those accountable who were involved in her disappearance … and ultimately her demise,” Birmingham Police Chief Patrick Smith said Tuesday at a news conference to announce the heartrending news.

“I wish I had all of you gathered here with good news. I wish I could share a high five or some other type of celebratory salutation but I cannot,” Smith added.

He added: “Tonight our entire city is mourning…Kamille is gone. Ripped away from her family. The pain her family is enduring is unimaginable.”

Alabama Governor Kay Ivey in a statement expressed her condolences to the grieving family, saying: “The heart of our state is broke, but we must do all we can to avoid this happening to another family. Our prayers remain with Kamille’s family and all who have been touched by this nightmare.”

Police are charging two people for the abduction and murder of Kamille—Patrick Stallworth, 39, and 29-year-old Derick Irisha Brown. They are being charged with capital murder and kidnapping.

The Police picked up Stallworth and Brown, his girlfriend the day after Kamille got missing. Stallworth’s Toyota SUV was impounded after authorities said he was the man in surveillance footage at an Avondale store near the time of Kamille’s abduction.

The Toyota Sequoia matched the description given by other children in the area at the time, who said a man had been handing candy to kids at Tom Brown Village reported AL.com.

According to AL.com, the police didn’t charge Stallworth and Brown of kidnapping and murdering Kamille. They were arrested on other charges— Stallworth on unrelated counts of child pornography based on images found on his phone, and Brown on a bond issue related to kidnapping charges she faced regarding her children.

“We believe that this was something they thought about and acted upon. They saw an opportunity to take a young child and they did. Our further investigation will reveal whatever happened after that,” Smith said.

Meanwhile, the Police are yet to reveal what they believed to be the motive in Kamille’s abduction and killing.