Home / AFRICA / Bride-to-be, 28 others die as boat capsize in Sokoto 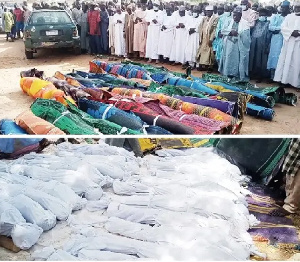 Bride-to-be, 28 others die as boat capsize in Sokoto

Tragedy struck on Wednesday, April 13 at 8 am in the Shagari LGA of Sokoto State when twenty-nine persons including a bride-to-be died in a boat mishap in the Shagari River.

The victims, who were mostly children were crossing the river to a nearby bush to fetch firewood which they sold in their community.

They are aged between nine and 17 years old. According to Daily Trust, 35 people were on the boat when it capsized.

Malam Muhammadu Auwal who is the village head of Gidan Magana lost five of his children in the mishap. He noted that there are 23 females and six males amongst the deceased.

He, however, said six of the passengers were rescued alive.

“You know the kind of situation we are in. There is a serious shortage of firewood which we use to cook our meals. The children used to go to the nearby bush across the river to fetch firewood for their parents while some of them sold it to get some money.

“The incident happened shortly after the boat took off. The sailor lost control because of strong water waves and the boat capsized,” Auwal said tears flowing down his face.

He explained that the tragedy occurred when many of the elderly people in the village were resting at home after the dawn prayer.

“I was already asleep when some youth came to my house to inform me about the accident. I mobilized the people of my community, including our local divers but before we got there, many of the children have died.

“I lost five of my children and two younger sisters of my wives. I also lost my niece whose wedding was fixed for one week after Sallah.

“This is the greatest tragedy that has ever happened in our community. We pray Allah to grant their souls eternal rest and give us the fortitude to bear the loss,” Auwal added.

Aliyu Muhammad who lost a 12-year-old daughter, Rufaida, in the accident said his child was healthy before she left for the bush.

“When I was coming back, I heard people shouting and screaming for help that a boat had capsized in our river.

“When I reached home my younger children told me that Rufaida was among those on board the canoe, so I rushed to the riverside only for me to meet her lifeless body lying by the river bank,” he said in an emotion-laden voice.

The Chairman of Shagari LGA, Aliyu Abubakar Dantani, said he heard about the accident from the councillor representing Dande Mahe and he immediately called the divisional police officer and they came to the village together, according to Daily Trust.

“We counted 28 bodies at the scene of the incident and they are all from the same village,” he said

According to him, this was not the first time such an accident was recorded in his area as around June last year, a total of 13 people, including women, were killed in a similar circumstance at Gangi village which is just five kilometres from this village.

The deceased were given a mass burial in accordance with Islamic rites around 4pm.

Condoling with the residents of the village, Governor Aminu Waziri Tambuwal, who was accompanied by his deputy, Manir Dan’iya; the state chairman of PDP, Bello Goronyo, and some commissioners, prayed Allah to grant the deceased Jannatul Firdaus.

Three victims of the boat mishap, Asma’u, Na’ima and Hadiza, 10, 9 and 8 years old, respectively, told Daily Trust how they survived the accident.

Asma’u, said after the boat capsized, she started swimming to the river bank before she was rescued by her elder brother.

While Na’ima and Hadiza, said they were rescued by local divers.

Asma’u however listed some of her friends who did not survive the mishap.