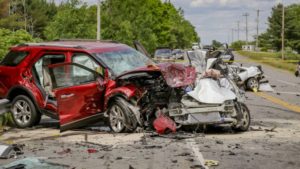 Four persons have perished in a ghastly accident on the Cape Coast-Praso road in the Central Region.

The motor accident, which happened on Monday 15th March 2021 occurred at Nyinasin on the Coast-Praso highway.

He narrated that the vehicle with registration number CR 906-20 suffered a tyre burst which led to the accident.

“ The vehicle suffered a tyre burst, and so the driver of the Toyota Hiace lost control of the vehicle and veered off  leading to the accident”, the eyewitness told Jerry Asare.

The two who are in critical condition are currently receiving treatment at the Cape Coast Teaching Hospital.

The bodies of the deceased have also been deposited in the Cape Coast Teaching Hospital morgue in the Central Region.