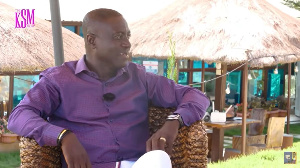 Host of Onua TV breakfast Show, Blessed Godsbrain Captain Smart has been implicated by the police as having been involved in some fraudulent activities and impersonation of the Roads and Highways Minister.

Kwesi Amoako Attah, the Roads Minister, had in August 2021, lodged a complaint at the Criminal Investigations Department of the Ghana Police Service, praying that the police probe the broadcaster over alleged corruption.

Captain Smart had been accused of fraud by one woman – Gifty Adwoa Twumasi. The woman who called into ‘The Seat’ program on NET 2 around the same period, claimed that the journalist had taken an amount of GHC25,000 from her under the pretext of helping her secure land at Achimota Mile 7.

The woman complained that Captain Smart had tricked her into paying GHC25,000 as bribe for the Roads Minister, Mr. Amoako Atta, to take a decision in her favour concerning the said land.

It would only be known later by this woman that the said amount she had given the broadcaster, never got to the minister, neither was anything done about the land.

Having been prompted about the interview on NET 2, the minister petitioned the CID to probe the incident and they have since emerged with their findings.

Among other things, the police said in their statement that after investigations, evidence has emerged to the effect that, the said woman, Gifty Twumasi had interest in a parcel of land in front of her property at Achimota Mile 7 which was being used as a taxi rank.

She had gone to see Captain Smart to use his influence to stop a developer who was developing the land from doing so. The statement also noted that the project was stopped by the roads minister after the broadcaster spoke about it on air.

To appreciate him, the woman visited the residence of suspect Captain Smart to thank him, together with some taxi drivers, with an amount of GH10,000 for his assistance in halting the said project.

The police report also noted that following this, the woman and her team visited Captain Smart for a second time to hand over GHC25,000 to him to be handed over to the roads minister for his role in halting the project.

Captain Smart was said to have visited the roads ministry with the aim of seeing the minister, without success.

The police has indicated that investigations are being finalized for prosecution.

Read the full report below: