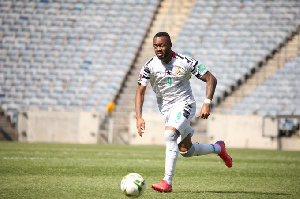 ‘We were not good enough’ – Jordan Ayew on ‘woeful’ AFCON exit

Jordan Ayew has issued a damning verdict over the performance of the Black Stars at the 2021 African Cup of Nations in Cameroon.

According to him, the Black Stars’ performances were not good enough admitting that for a young side, there was more room to correct the mistakes of the AFCON and to do better in the future.

Milovan Rajevac’s side ended bottom of Group C at the AFCON with one draw (to Gabon) and two losses (to Morocco and Comoros).

The loss against Comoros was recorded earlier today in Garoua where the team lost 3 – 2 to the first-timers.

Speaking after the game, Jordan, who failed to register a goal in the three matches he played lamented the group exit.

“We were not good enough, we have a young squad, it’s a wake-up call for everyone and if we don’t learn from this then I don’t know,” the state broadcaster GTV quoted him as having said.

The last time the Black Stars exited an AFCON without a win was in 2006.