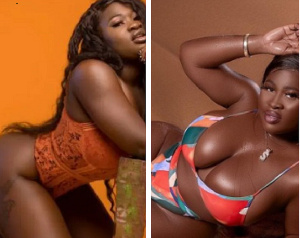 She said, should Ghana scores three goals against Portugal, she will go no-cloth.

The new norm of showbiz celebrities feeding their followers with sultry photos is fast becoming a trend among female celebrities in Ghana.

These women, who in most cases claim to champion the cause of body positivity, share racy photos of themselves which spark discussions on social media.

In this regard, the spotlight has been cast on Ghanaian singer, Sista Afia, who has joined the list of female celebrities that usually tickle the fancy of fans with racy pictures.

In the case of ‘if you’ve got it flaunt it’, Sista Afia has been captured in several instances on social media, sharing pictures that display her huge boobs, butts, thighs, and so on.

Aside from the regular photoshoots in racy outfits, heavily endowed Sista Afia has crashed the internet several times, particularly with pictures in which she has been captured rocking bikini fits.

She has vowed to go naked should Ghana score three goals in its encounter with Portugal, Thursday and while it may not be a motivation for the players, some social media users have argued the post was just made to court attention.

The musician has since been trending on various social media platforms.

Let’s check out some instances where Sista Afia ‘bared it all’ on social media.