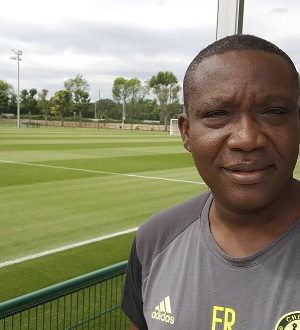 A Ghanaian kit man with European-based Chelsea FC identified only as Eric has reportedly passed away after spending two weeks on vacation in Ghana.

Taking to his social media page, former Chelsea captain John Terry wrote that he will be missed.

“RIP ERIC. Heartbreaking news today. BOSS you will be deeply missed,” he tweeted.

According to him, the late kit man helped him a lot growing up through the academy ranks of the football club.

“This really hurts! RIP ERIC. You really helped me through a lot growing up in the academy and you were more than a Kit man, you were a Good hearted man who wanted nothing but the best for Everyone!! Thank you for everything and May your soul rest in perfect peace,” Hudson-Odoi tweeted.

Chelsea FC defender and England international Reece James also labelled the late kit man as someone with ‘a real clean heart’ who always wanted the best for all the academy boys.

“Rest In Peace Eric. You were more than a kit man. You had a real clean heart, funny personality and always wanted the best for all the academy lads. Miss the days when I used to rummage for fresh Nike socks. Until we meet again fly high & rest easy. Will miss you” he said in a tweet.

Meanwhile, a social media influencer with the handle ‘Asiedu Mends’ has claimed to be the nephew of the deceased man.

According to him, his uncle came to Ghana to spend his holidays some two weeks ago and passed away in the morning of Tuesday, June 7.

Sharing a picture of the late Eric, he wrote “This is my uncle. He came to Ghana to spend some holidays just last 2 weeks and he passed away this morning. These past few days hasn’t been okay with me but better days ahead. Thank you uncle for the advice and support”.

It is not immediately clear the cause of Eric’s death and whether he died in Europe.

See reactions to Eric death below: