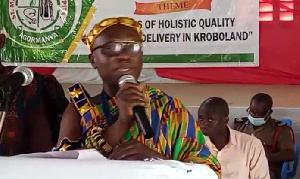 Chief fights off claim ‘Krobos are most HIV/AIDS infected people’

The chief of Menekpo, under Manya Krobo traditional area in Krobo Odumase, has debunked rumours about Krobo being the hotspot for HIV/AIDS in the Eastern region and Ghana at large.

According to Nene Teye Adjiso III, people across the region visit health facilities within the Krobo district to test their status of the viral infection.

As a result, the facilities in the enclave record a lot of visitors creating the impression that Krobos are the lead carriers of the virus which is incorrect.

The falsehood in the minds of the people according to him began to be rumoured in the area and that came to the attention of his friend who visited the area to check the veracity of the news being disseminated.

“So for him, he was looking round to see how Krobos have grown lean, and to his surprise, everybody was looking fine. But this was the sector that the tests were taken and it has gone a long way to reduce, if not to eradicate, the canker,” the chief said.

He made the remarks on behalf of Nene Sackitey II, Konor of Manya Krobo Traditional Area and the President of Eastern regional House of chiefs at the 75th anniversary lectures of St Martins De Porres at Agormanya on the theme 75 years of Holistic Quality health care delivered in Krobo land.

Nene Teye Adjiso III applauded the tremendous efforts being made by the managements and staff of the Hospital in the reduction of the deadly viral and quality health care provided for the past 75 years.

Nene concluded by appealing to the Catholic church to provide more health infrastructures at the hospital “as they say Oliver twist ask for more” to continue serving the people of Krobo land.