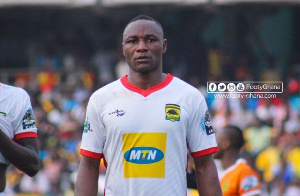 The 28-year-old has been impressive since joining the Ethiopian outfit Wolkite City FC last year after leaving the Porcupine Warriors.

In an interview with Kumasi-based Light FM, the former Aduana Stars towering guardsman indicated his monthly salary at the Ethiopian club is seven times better than what he received during his stint with giants, Asante Kotoko.

He has therefore called on club Administrators to take good care of the players plying their trade in the country financially.

“To be honest Ethiopian league is far better and competitive than Ghana league and I must confess that the money I receive here in Ethiopia is seven times better than what I received during my stint with Kotoko. I will urge club Administrators to take care of the players financially” he said.

Meanwhile, Wahab Adams has confirmed approach by the Ethiopian Football Association to switch nationality to play for their national team.

Previous LIVESTREAMED: Joe Biden warns Putin, stands with Ukraine in State of the Union
Next Chief fights off claim ‘Krobos are most HIV/AIDS infected people’