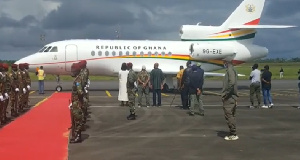 While the opposition continues to fight President Nana Addo Dankwa Akufo-Addo over his use of expensive private jets despite having a functional presidential jet, the Executive Director of think-tank, Alliance for Social Equity and Public Accountability, ASEPA, Mensah Thompson, has alleged that the presidential jet off has recently been made available for the personal use of the president’s close relatives.

According to Mensah Thompson, some children of a close relative of the president between December 20 to December 30, 2021, were allowed to use Ghana’s Presidential Jet for a shopping trip to the UK.

In a Facebook post sighted by GhanaWeb, the ASEPA boss further alleged that the relatives of the president brought their friends along on the trip and they turned the Presidential Jet into a party venue, of which they shared pictures and videos on social media.

“So between the 20th and 30th of December, 2021, during the Christmas, the children of a close relative of the President took Ghana’s Presidential Jet the Falcon EX jet on a trip to the UK just for Christmas shopping.

“They didn’t go alone, they went with their friends and partied in the sky all through the trip, taking snap videos and flaunting their lucky adventure,” he alleged.

Albeit without any of the videos or pictures to back his allegations, he lamented the decision by the government to release the jet to the president’s relatives while the president himself continues to travel in private jets which cost the state millions of cedis.

“Ghana has spent close to half a billion dollars in the last two years renting private jets for our president, whiles his family members continue to lavish in our rejected aircraft at the expense of the poor tax payer,” he said.

Calling for answers from the relevant state agencies, Mr Mensah added that “The Ministry of National Security, the Ghana Airforce and the Civil Aviation Authority would have to provide answers to the good people of Ghana why a national security asset like the Presidential jet was left at the mercy of spoilt youngsters who went partying around the world playing in Ghana’s Presidential jet, creating an international diplomatic spectacle embarrassing the country Ghana.”

Controversy over president’s use of private jets for foreign travels

President Nana Addo Dankwa Akufo-Addo has been accused of profligacy with his decision to resort to the use of private jets for his foreign travels.

According to some critics and members of the opposition, the decision by the president to use private airplanes at the expense of a functioning Falcon EX Presidential Jet owned by the state is a means of incurring colossal losses to the state.

The Member of Parliament for North Tongu, Samuel Okudzeto Ablakwa, has for several months tried unsuccessfully to get government to disclose the cost of the president’s foreign travels using private jets.

The Minister of National Security, when summoned to parliament to answer a question on the cost, failed to make a disclosure citing the safety and security of the president.

Meanwhile, the government has announced plans to acquire a new and bigger presidential jet for the State. 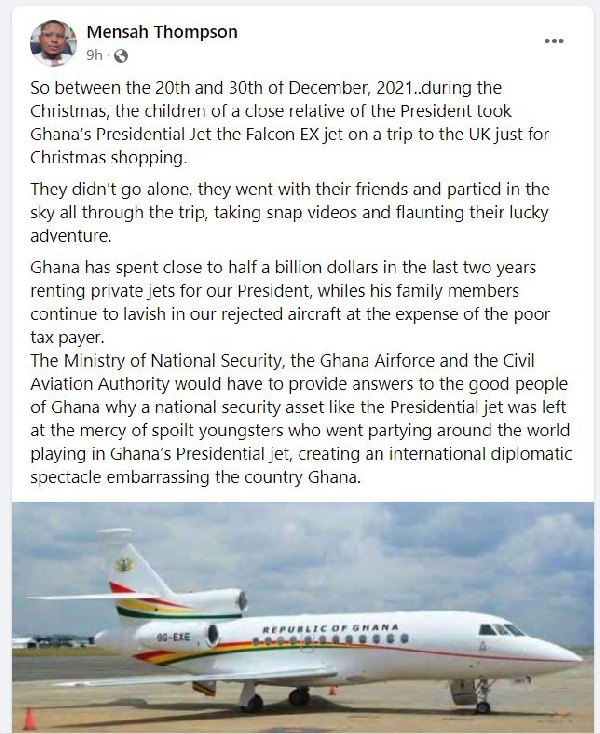 Previous AFCON 2021: Check out the squads of all 24 Teams
Next Kevin Taylor hints of touchscreen analysis on KIA Christmas Tree saga