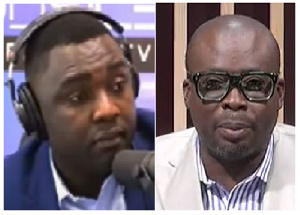 US-based journalist and ardent government critic, Kevin Taylor, has hinted that he will deliver a touchscreen analysis of the Christmas tree procurement at the Ghana Airports Company Limited, GACL.

Taylor, in a Facebook post, revealed that he had bought a Christmas tree at $178 for his family and wondered how fellow journalist and board chairman of GACL, led the company to purchase four Christmas trees for thousands of Ghana cedis.

He shared a photo of the tree he bought and the one GACL procured and captioned it as follows: “This first picture tagged Kevin Taylor’s Xmas tree is my Christmas tree which I paid $178 for, for my family.

“Let’s say Paul Adom Otchere bought 3 of mine for GACL twice the price of mine for a unit, how come we paying over 100,000 cedis for that?

“This needs touch screen analysis from WADR on Monday because it looks like in Ghana under Akufo Addo, the least opportunity anyone else gets, they want to steal from the masses.”

WADR is ‘With All Due Respect,’ his widely followed social media socio-political commentary programme.

A number of opposition National Democratic Congress activists on January 6 started circulating a photo and cost of one of the Christmas Trees stationed at the departure hall of the Kotoka International Airport’s Terminal Three.

Barely 24-hours later, GACL board chair Adom-Otchere, issued a statement justifying the amount spent on the tree and other decorations at KIA for the 2021 yuletide.

He confirmed in a Facebook post that the state company indeed spent some GH¢118,000.00 on Christmas trees and decorations justifying the amount as the lowest spent by the state company for the same purpose since 2006.

“Two separate suppliers were invited to submit bids. The bids were discussed and discounts obtained. (We are grateful to Jandel Limited and Favors and Arts) The beautiful Christmas tree standing at Terminal 3 and 3 others altogether cost GH¢34,000, which was graciously provided by Jandel Limited at a heavy discount. (We thank Jandel Limited),” Adom-Otchere wrote in his Facebook post.

Details of the invoice prepared by Favor and Arts in the name of the board chair as sighted by GhanaWeb indicate the company supplied and installed four Christmas Chandeliers with lights at a unit cost of GH¢21,000 each, bringing the total cost to GH¢49,000.

GACL was further billed GH¢3,500 for “Transportation/Scaffold” as well as GH¢3,000 for “Assembling/Dissembling” with the total cost for both making GH¢6,500.

This brought the entire cost for the services and supplies of both Jandel Limited and Favors Arts to GH¢124,500.00.