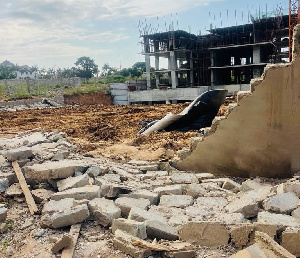 Some Chinese businessmen are forcibly taking over some lands to locals around the AU Village in Cantonments, the New Crusading Guide newspaper has reported.

According to the report sighted by GhanaWeb, these Chinese nationals have allegedly staged attacks on land owners whiles employing armed land guards and thugs who routinely harass and intimidate land owners.

“The gang is also said to demolish constructed fence walls and structures on plots of lands belonging to their rightful owners.

“Information gathered is that, the owners of the said land situated around the AU Village took possession of the land after the acquisition and exercised overt acts of ownership over the said piece of land by constructing a fence wall,” the report stated.

The New Crusading Guide further alleged some officials of the Ghana Police Service have been deployed to give 24-hour protection to the Chinese nationals to carry out construction projects on the land despite a court order against doing so.

“According to residents around, the police’s intervention which they have all been expecting is far-fetched since the leadership is rather deploying officers to the land to rather protect the Chinese nationals against indigenous Ghanaian land owners.

“Although the owners of the land subsequently reconstructed the fenced wall and that of the caretaker post, one of the Chinese Yang Yang threatened to further pull down the wall and any structure on the land,” the report stressed.

The Chinese nationals, the report added, have commenced construction activities on the land and intend to appropriate plots belonging to the owners since they (the Chinese) have the backing of some top political figures.

Checks however indicate that these Chinese nationals have failed, on countless occasions to establish any rights in the disputed land and do not have any land title certificate to defend their rights to the land.

Meanwhile, these Chinese Nationals who are managers of the Zonda Tec Ghana Ltd., a Light and Heavy-duty equipment and vehicle trading company and its subsidiaries continue to flout an Interlocutory Injunction granted against them over the said parcel of land.

There is a pending Interlocutory In junction in a Suit No. L.D/056/2022, against Zonda subsidiaries.

However, they continue to work right in the immediate site of the police in the heart of the City.