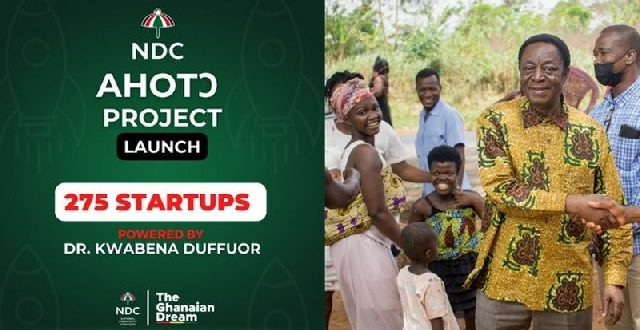 There appears to be some disagreement among elements in the National Democratic Congress over a project scheduled to be implemented by a former Finance Minister under the NDC, Dr. Kwabena Duffour.

On April 7, Dr. Duffour who is also former Governor of the Bank of Ghana officially launched the ‘Ahotor Project’ for NDC grassroots in Ashaiman.

The project, according to him, is geared toward setting up micro-businesses in all 275 constituencies in order to create local funding for the day-to-day running of the party at the grassroots level.

This included social events such as funerals, naming and marriage ceremonies, durbars, political campaigns and rallies which required the use of items such as plastic chairs, canopies and PA systems.

Following the launch, reports suggest that Dr. Duffour, as part of efforts to extend the project to other parts of the country decided to relaunch the project at the party’s headquarters at Adabraka on Tuesday, June 7, 2022.

He invited National Executives of the NDC in a letter to that effect.

The event was, however, called off at the eleventh hour.

NDC Executives deny the involvement of Ofosu Ampofo in cancellation:

Media reports suggested that the event was called off following the instructions of the party’s National Chair, Samuel Ofosu Ampofo.

This was however refuted in a letter released by General Secretary, Johnson Asiedu Nketia on Wednesday, June 8, 2020.

In the said letter, Mr. Asiedu indicated that reports suggesting the involvement of Mr. Ofosu-Ampofo were false and should therefore be disregarded as such.

“We wish to put on record that since the time the project was proposed, the Functional Executive Committee of NDC has held several meetings with Dr. Duffour and his team to try to streamline an implementation scheme for the project that will satisfy the intentions of the donor without compromising the rules and principles of the Party.

“A mutually acceptable agreement was reached at our FEC meeting last week, with Dr. Duffour in attendance pursuant to which we scheduled the presentation of the Ahotor project items to the party for Tuesday, 7th June 2022.

“The event was rescheduled because of certain issues raised subsequent to the final meeting by the donor with aspects of the agreement which required further deliberations and clearance by FEC,” parts of the letter read.

Duffour’s camp insists Ofosu Ampofo directed for the relaunch to be cancelled:

In a latest development, however, Former National Organizer of the NDC and Member of Dr. Kwabena Duffuor’s Ahotor Project Team, Yaw Boateng Gyan, has contradicted the statement, stressing that Ofosu-Ampofo was involved in the cancellation of project launch at the party’s headquarters in Accra.

According to him, although it had been agreed at a meeting involving him and Dr. Kwabena Duffour and members of the NDC Functional Executive Committee (FEC) that the event be relaunched, on Wednesday, June 1, 2022, nothing else was communicated after.

He said that all was set for the event at the headquarters when the National Chairman, through the National Communications Officer, Sammy Gyamfi, called him a day before the scheduled event [June 6] to inform him that the relaunch scheduled for June 7, has been put on hold.

“We did not hear from FEC throughout the weekend, so we focused on the preparations for the relaunch on Tuesday, June 7, 2022.

“In the morning of Monday, June 6, 2022, while preparing for the relaunch on Tuesday, Sammy Gyamfi called me and delivered a message from the National Chairman, Hon. Ofosu Ampofo that the relaunch of the Ahotor has been put on hold,” he said in a statement.

“This was the last communication regarding the relaunch of the Ahotor Project with FEC,” the former NDC National Organizer explained in a statement,’ he added.

The donation includes a Public Address (PA) system, 100 plastic chairs and 4 canopies which can be rented out to generate revenue for members.

Speaking at the launch, Dr. Duffour said the Ahotor Project is a real deal for progress, jobs and to generate sustainable revenue for use as welfare – such as hospital bills, funeral donations, school fees, etc.

“We want to create a situation whereby there will be money in the party coffers of every constituency. The project is going to make you fishers, and not getting money from people all the time,” Dr. Duffour said.

He said the project will be replicated in all 274 branches, beginning from the Greater Accra Region, and encouraged leadership of the party in Ashaiman to ensure that they boost revenue to meet their needs.

Meanwhile, Dr. Kwabena Duffour has been tipped as one of the possible candidates to contest for the NDC’s flagbearship position for the 2024 elections.

Previous Did Mzbel mock Afia Schwarzenegger in this video?
Next AirtelTigo to reward Customers in the ‘To Gu Me So’ Reloaded Promotion