Home / ENTERTAINMENT / Did Mzbel mock Afia Schwarzenegger in this video? 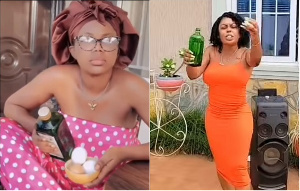 Did Mzbel mock Afia Schwarzenegger in this video?

Singer Mzbel has sent social media users literally rolling on the floor with laughter over a recent recording that captured her giving lectures on how the numerous curses evoked by some ‘unknown’ persons over the years have failed to work.

In the video that portrayed the singer’s acting skills, she held in her hand a bottle of Schnapp alongside two white eggs and a brown egg in a small calabash, depicting someone ready to unleash curses.

The video suspected to have been recorded in the morning captured the ’16 Years’ hitmaker in her pink jumpsuit and hair bonnet. She questioned the gods over their unwillingness to pay heed to the curses she always unleashed on her haters.

“I can’t explain what is happening to me. I have cursed so many people but they all didn’t materialize. I don’t know why the gods have failed to answer me. Is it because I always break these eggs and Schnapp on my tiles? You know that I can’t step out and go curse outside on the soil, people will tag me as a mad woman,” she stated.

Social media users reacting to the video commented that Mzbel was once again throwing shots at her longest rival, Afia Schwarzenegger, who three days ago stood on her tiled compound to rain curses on lawyer Maurice Ampaw and her alleged lover, Chairman Wontumi for denying that he had a sexual affair with her.

This wasn’t the first time the actress who identifies herself as a comedienne had stood in the comfort of her home to rain curses on her ‘accusers’ all in a bid to prove a point that she was innocent in a case.

Tags Afia DID IN MOCK MZBEL Schwarzenegger THIS video

Previous Businessman claims ownership of Medikal’s mansion; drags him, others to court
Next Confusion rocks NDC over Duffour’s Ahotor project