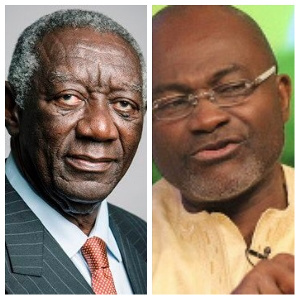 By Kennedy Agyapong’s own confession in 2020, his one-time great relationship with former President John Agyekum Kufuor has broken down and they are no longer on the good terms they once were.

According to Kennedy Agyapong, the breakdown in the relationship was caused by what he perceives to be misinformation relayed to then-President Kufour during the NPP’s presidential primaries in 2008.

In an interview on Metro TV’s Good Evening Ghana program in 2021, Kennedy Agyapong recounted how the whole thing went down.

“I had a very good relationship with President Kufuor during his second term but the same cannot be said for now. A young guy known as Ato Eshun lied to him and the president didn’t give me a chance to explain.

“He is a very bad boy, he told Dr Anane that I was supporting Akufo-Addo instead of President Kufuor’s candidate. Dr Anane later called the president to tell him I don’t support his candidate Alan Kyerematen and the way the man (Kufuor) loved me to death, he sacked me from his house without giving me any chance.

“I think now he’s realized I never did anything of that sort, I never campaigned against Alan until he sacked me from his house. He was hurt about that information so he said to me; ‘You, small boy, anybody you ask me to give the position, I do it but you can’t do one thing for me and you are opposing me’. I honestly don’t know what Dr Anane told him to destroy our relationship”, Kennedy Agyapong revealed.

Kennedy Agyapong’s version of the event was however dismissed by the office of the former president who in a press statement to Paul Adom-Otchere set the records on the matter.

Adom-Otchere in his presentation of the information from the office of former president Kufuor, cited ‘misunderstanding’ as the cause of his breakdown in the relationship between the two.

“It would appear that President Kufuor believed that his son was in Tema doing something wrong so he looked for his son and he was in the house. It was then, according to the story, that it was misrepresented to President Kufuor that Kennedy Agyapong was on the side of the businessman against President Kufuor, Adom-Otchere stated.

He concluded with a plea to persons with close contact with Kufuor and Kennedy Agyapong to take steps and bring them together since they’ve both shown willingness to reunite.

Previous Don’t invest all your money, blow some on good living – Eastwood Anaba advises
Next A strange hand touched my breast, my hand stroked a penis – Tourist tells ‘strange’ story