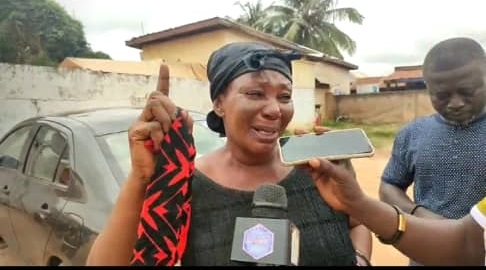 The family of the lady who died mysteriously with her husband at Abuakwa Maakro in the Atwima Nwabiagya South Municipality have make shocking revelation about the deceased.

According to them, their daughter, Ernestina Gyaama Boakye known as Ernestina Jackson, now deceased, renounced his family two years ago when she returned from the Netherlands.

The mother of the deceased woman, Lydia Boakye Benson in an exclusive interview with OTEC News on Thursday, August 4,2022, disclosed that, her daughter told her she wouldn’t want to have anything to do with the extended family.

“She told us two years ago that, she has adopted her nuclear family, thats her husband and two children as the only family she has and so therefore wouldn’t have anything to do with her extended family ”

“That was the last time i saw my daughter and her family”. She cried.

“All this while, i was made to believe that my daughter was leaving in the Netherlands with her family not knowing she was staying in a rented apartment at Abuakwa ”

Madam Lydia Boakye Benson told OTEC News that it had been the most difficult moment in his life after he finally found out that his eldest daughter who was supposedly leaving in the Netherlands had indeed died mysteriously.

The Police at Abuakwa in the Ashanti Region on August 3, 2022 begun  investigating circumstances that led a man to keep his wife’s dead body in their flat for some months.

The man’s body according to police  was also discovered  in the family’s bathroom, sitting on the toilet.

Two children of the couple, aged 11 and 13, were also rescued in an unconscious state.

They were in a locked room in the flat.

The family has been identified as the Jacksons, and they lived in a rented apartment at Abuakwa Maakro, in the Atwima Nwabiagya District of Ashanti.

Tags ABUAKWA at Couple DEAD found HOME IN Maakro THEIR