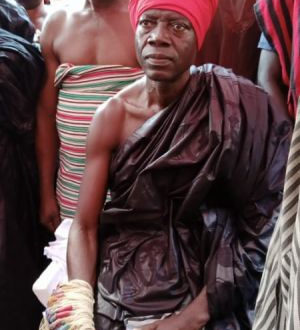 The High Court in Hohoe in the Volta Region has thrown out one Nana Obiri Kwadjo who is said to be parading himself as the Youth Leader (Nnyasubi Owie) of the Nkonya Wurupong traditional area.

Nana Obiri Kwadjo, whose authority is being challenged filed a Counterclaim after Nana Komla Akploah II, the Adontenhene of Nkonya Wurupong had sued him for purportedly holding himself as the youth leader (Mmratehene).

The plaintiff Nana Komla Akpoah ll Adontenghene of Nkonya Wurupong Traditional Area. In the substantive application is seeking declaratory and injunction reliefs against the Defendant (Nana Obiri) over the legitimacy of his role.

But, moments after entering his appearance, Defendant (Nana Obiri) filed a Counter application and asked the court to strike out the initial application against him for lack of jurisdiction.

However, his request for the court to strike out the substantive matter was dismissed.

The court presided over by Justice Ayitey Armah-Tetteh in its ruling on July 5, 2022, dismissed his application.

“The Applicant (Defendant) has not told the court which family or lineage he is from that has the sole right to be made the Mmratehehene of Nnyasubi or Youth leader within the Nkonya Wuropong Traditional area.

“The Youth leader within the Wurupong Traditional area as presently constituted and not hailing from any particular family or lineage within the Wurupong Traditional area cannot be a chief within the meaning of a chief as defined by Article 277 of the 1992 constitution and repeated verbatim in section 57(1) of Act 759 and as such any issue about his nomination, election installation or who has the right to nominated him cannot be a cause or matter affecting chieftaincy as provided for in section 76 of Act 759 section 117 of Act 459.”

The court stated further that, “the plaintiff’s claim as endorsed on the writ of summons is not a cause or matter affecting chieftaincy and is properly before the court.

The Defendant in his Counterclaims sought the following reliefs.

a. A Declaration that the Plaintiff has neither traditional function nor vested power to appoint and install Mbrateahene and or Youth Leader in the Nkonya Wurupong Traditional Area.

b. A further declaration that the power to appoint and or install a Youth Leader and or Mbrateahene is a preserve of the paramount chief of the Traditional Area Nana Kwadwo Asiakwa II and with the aid of his council of elders.

d. General damages for affecting the peace and psyche of Defendant.

e. An order of perpetual injunction to restrain the Plaintiff, his family, clan and all other like minds from ever claiming authority and right to appoint and install Mbrateahene of the Nkonya Wurupong Traditional Area.