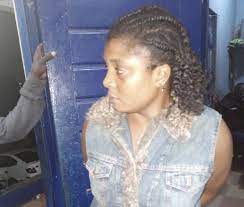 A feud between two commercial sex workers in Kumasi turned bloody on Saturday night after the assailant who has been identified as the godmother of all the prostitutes at Dichemso Plaza inflicted deed razor wounds on the vagina, face and thighs of her victim for allegedly snatching her customer.

The suspect, Bella is currently in the grips of the Airport Police while efforts are been made to arrest her four accomplices who are currently on the run; the victim, Ruth alias ‘Cherish’ has since been discharged from the Manhyia Government Hospital, but still nursing her wounds.

It has been reported that Bella had earlier warned Ruth that she would “design her face with razor and cut off her v*gina before sending her back to Nigeria” if she didn’t stop chasing a particular man who has been her topmost customer.

An eyewitness who spoke with Kumasi-based Angel FM monitored by MyNewsGh.com on Monday after said, “they accosted her by the roadside and threw her to the ground; four of them held her by the legs and arms while, Bella cut her with the sharp razor. She succeeded in opening deep wounds on her face, thighs and on the v*gina”.

According to other accounts, the victim, Ruth, is a university student on vacation in Nigeria who has been brought to Ghana by the assailant, Bella to indulge in the illicit sex trade in order to raise some money to cushion her when school resumes.

MyNewsGh.com has managed to reach the victim, Ruth and has recorded her account in the interview below.

Previous VIDEO: Why police officers faced off in public
Next Court throws out ‘youth leader’ of Nkonya Wurupong