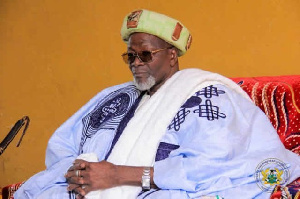 The overlord of Dagbon, His Royal Majesty Ya-Naa Abukari Mahama II, has married a new wife generating social media debate in view of the circumstances under which many believed it happened.

MyNewsGh.com has sighted pictures of the King and his bride on social media amidst controversies through a secretary to the Ya-Naa Abdul-Rahaman Mohammed who has declined comment on the matter.

The 90-year-old King is confirmed to have added the mother of one believed to be in her mid-20s to his numerous number of wives at the palace at an event recently.

Sources reveal that the beautiful young lady is a native of Savelugu Nakwahugu Fong in the Savelugu-Nanton District of the Northern Region.

It is alleged that the lady in question was already married to one Rashid known widely as Birabia a native of Karaga and that his wife was snatched during a visit to the Gbewaa Palace while attending a wedding in Yendi.

But the new bride now a Queen to the King has denied allegations made by the father of her baby, though admitted that they were in a relationship.

In a video sighted by MyNewsGh.com, she disclosed that their relationship ended abruptly because Rashid impregnated another woman and there was no way she could accommodate a cheating husband.

“We loved each other to the extent I got pregnant for you and even gave birth to a baby girl. You refused to take steps in regularizing our relationship by marrying me. My mother invited you and discussed me going back to school two years after birth because that truncated my education. He bought items in readiness for marriage but to date, nothing happened. We later heard that he impregnated another woman and claimed until she gives birth he cannot go ahead with the wedding with me. It’s been 3 months the other woman gave birth and nothing has been heard. I heard he is even married to that woman. I have no relationship with him whatsoever,” she revealed.