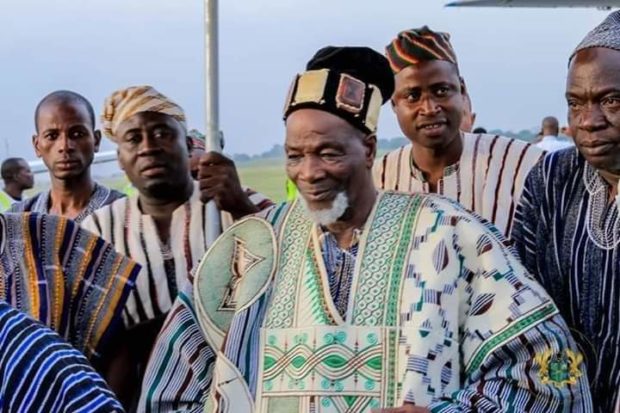 The Overlord of the Dagbon Kingdom N’dan Ya- Naa Abubakari II has sent a goodwill message to the Dagbon Union (DUUK) on their maiden damba festival held in London.

The event which was held in London on the 4th of December 2021 witnessed the sons and daughters of the Dagbon State living in the United Kingdom displaying the rich dagbon culture.

In a Goodwill message sent by the King said that “it is his prayers that the maiden Damba festival will not be a one-off event and urged the Dagbon Union (DUUK) to use the annual festival as a vehicle to work in partnership with other stakeholders to bring about a badly needed development in Dagbon and Ghana at large.

Alhaji Alhassan Mbalba, Chairman of the Dagbon Union UK (DUUK) in his address gave a brief history, aim and objectives of the Union and how it started in 2012 as a welfare Group to address the needs of its members.

The maiden edition was graced by Ghana’s Deputy High Commissioner to the United Kingdom, Her Excellency Ms Rita Tani Iddi who is a native and royal of the Dagbon State, Award-winning songstress Sherifa Gunu among other musicians.

YA- NAA ABUBAKAR II, THE KING OF DAGBON SENDS A GOODWILL MESSAGE TO DAGBON UNION UK(DUUK) ON THE OCCASION OF DUUK’S MAIDEN DAMBA FESTIVAL HELD ON 4TH DECEMBER 2021 IN LONDON

The sons and daughters of the “Dagbon State” of northern Ghana living in the UK held its maiden Damba festival under the auspices of Dagbon Union UK(DUUK).

The Overlord of the Dagbon Kingdom N’dan Ya- Naa Abubakari II sent a Goodwill message to DUUK wishing his sons and daughters a joyous, reflective, and successful Damba festival and expressed his appreciation to DUUK for the Union’s efforts in showcasing the rich Dagbon culture in the diaspora.

The King said it is his prayers the maiden Damba festival will not be a one-off event and urged DUUK to use the annual festival as a vehicle to work in partnership with other stakeholders to bring about a badly needed development in Dagbon and Ghana at large.

The Guest of Honour, Ghana’s Deputy High Commissioner to the UK, Her Excellency Ms Rita Tani Iddi who is a native and royal of Dagbon State speaking to the theme of the occasion: “The Damba Festival: A Tool for the Promotion of Socio-Cultural Cohesion of Dagbon State” commended the leadership of DUUK for this noble idea and she said “ Nai Tuma which in Dagbani dialect means “Well done”. She gave a brief history of the Damba festival; to commemorate the Birth of Holy Prophet of Islam Mohammed(PUBH), and the significance of Damba- to glorify the chieftaincy institution and for reunion of family members and friends.

Her Excellency Ms Rita Tani Iddi reiterated the importance of PEACE, UNITY and RECONCILIATION in Dagbon State, and said, with the enskinment of Ya Naa Abubakari on 25th January 2019 as the new overlord the Dagbon, we need to forge ahead in unity which is essential for development of Dagbon. She said Dagbon is a great state which has survived many wars and defended itself against external aggression, but it can only be defeated by its own internal conflicts and we ought to be wary of that.

She admonished members of DUUK to play a significant role in these peace and reconciliation efforts by advising our brothers and sisters in Ghana to embrace peace and reconcile with each other, so that together we can have one united Dagbon State.

Chairman of DUUK Alhaji Alhassan Mbalba in his welcome address gave a brief history, aims and objectives of DUUK: DUUK started in 2012 as a Welfare Group to address the welfare needs of its members. However, DUUK registered as a charity in the UK in January 2018 and seeking to work in partnership with traditional rulers and other stakeholders to bring about accelerated development in Dagbon and Ghana at large.

Alhaji Mbalba stated that DUUK is currently using its own internally generated funds to sponsor two children with disabilities in Savulegu. And DUUK is looking for funding from other donors to expand and extend its Child Sponsorship Programme to other children in need in Ghana.

Love for a fair lady ends Yatimi in prison