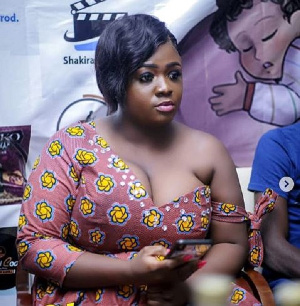 Damning video of Tracey Boakye surfaces after announcing her wedding

The showbiz space has been buzzing with news of Tracey Boakye’s upcoming wedding with Frank Badu Ntiamoah, a ceremony scheduled for Thursday, July 28, 2022, at a coded location in Kumasi.

Beyond the razzmatazz, pomp and pageantry expected to characterise the wedding ceremony and the quest to know more about the husband-to-be, one thing that lingers is why the actress backtracked on her decision to never marry having subscribed to the ‘chop and go’ mantra in the past.

Tracey Boakye in an interview with Zionfelix in 2019 expressed her inflexible resolve to not be in a relationship but pay men she admires for sex and after the job is done, boot them out.

“As of now, I decide who to come to me. When we’re done having sex, I sack you; I don’t want any relationship. It’s chop and go,” Tracey unequivocally remarked in the Twi language. “If I’m not in the mood, you don’t come to me…”

Flanked by her colleagues, including Xandy Kamel, the ‘East Legon landlady’ as she is affectionately called, counselled her peers to follow her footsteps, stressing it was comforting.

Ahead of the wedding, there has been a black-themed bachelorette party on July 26.

Information about the wedding is scanty but it is expected to be graced by some musicians booked to perform.

Mc PapJay of Y102.5FM, Kumasi, has been billed to be the Master of Ceremonies with DJ Lamar as the official disc jockey.

The event, according to Tracey Boakye’s post, will be produced by filmmaker Kofi Asamoah.

Previous VIDEO: Please help me; my breast is ‘burst’ – 59-year-old widow cries
Next No regrets should my children see my naked photos online – Shugatiti