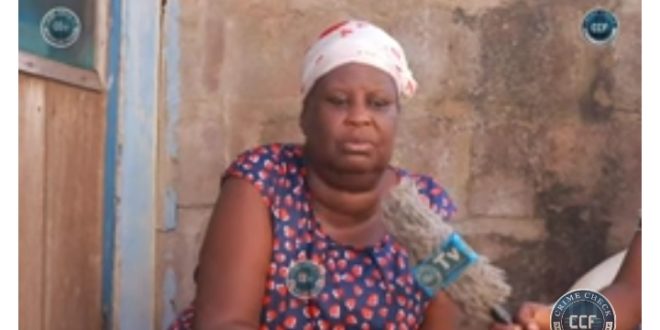 A 59-year-old widow, Esther Kwabea would have lost her life to a disease suspected to be breast cancer without the knowledge of her relatives and neighbours at Madina.

But for the timely support of the Crime Check Foundation (CCF), she would receive medical treatment.

Speaking to crimecheckghana.org, Madam Kwabea said her left breast got swollen and suspecting it was a boil, she resorted to home treatment using self-medication with the help of a man whom she said was a herbalist.

Unfortunately, she said the boil burst and induced immense bleeding from her breast.

This she said scared her for which reason she visited the Shai Osudoku Hospital for treatment.

“I was on admission at the hospital for a while but doctors told me they could not diagnose what was wrong with my breast. I thought they would have referred me to the Korle-Bu Teaching hospital but they rather discharged me from the hospital and asked me to run several laboratory tests,” she said.

Madam Kwabea who has been battling the strange disease since April 2022 and has been starving due to financial difficulties had to call CCF for support, as she could not raise Four Hundred and Fifty Ghana cedis to run diagnostic tests.

She said her family left her to her fate until the Foundation went to her aid with an amount of Six Hundred Ghana cedis to enable her to run one of the tests as it seeks additional funding for her to do all the tests and undergo treatment.

The money was the contribution of a US-based donor, Jane Baptist towards CCF’s Health Check Series.

Madam Kwabea could not hold her tears while she thanked Madam Baptist and CCF for supporting her.

“I am crying because I did not have any hope of getting support. God bless you for the gesture,” she sobbed.

Crime Check Foundation has paid for the medical bills of many sick individuals including those who required surgery.

Previous ‘After slamming Ghanaians with more taxes, when will Akufo-Addo learn’? – Prof. Hanke asks
Next Damning video of Tracey Boakye surfaces after announcing her wedding