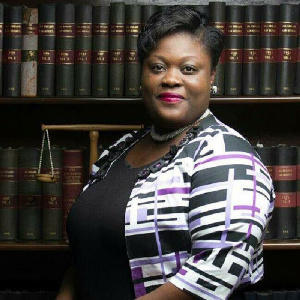 Power FM Presenter, Oheneba Boamah Bennie who was recently released from jail has claimed Deputy Attorney General and Minister for Justice, Diana Asonaba Dapaah told him in the face that he would be sentenced ahead of the court delivering judgment.

According to him, following this statement from the government’s deputy legal advisor he knew he would not escape prison.

“I am saying this for the first time that during one of the hearings, a Deputy Attorney General, a woman, who had come to court to defend the State looked at me in the face and told me I would be jailed and that she’ll prepare fufu and soup and come and visit me in prison. I swear to God she said this to my face,” he told host Bonohene Baffuor Awuah in an interview on “Ghana Kasa” show on Kasapa FM/Agoo TV Tuesday morning.

Oheneba Boamah Bennie added the Attorney General’s office was burnt on seeing him incarcerated hence rushed in writing its report and praying the court to jail him.

The ex-convict claimed President Nana Addo Dankwa Akufo-Addo had influenced some justices of the Supreme Court after the declaration of the 2020 presidential election results.

The court presided over by Justice Elfrida Denkyi, also slapped the convict with a GH¢3,000 fine.

He was dragged to court by the Attorney-General (A-G) for contempt.

The A-G urged the Accra High Court to commit Bennie to prison for contempt of court for alleging that President Akufo-Addo had met with eight justices of the Supreme Court, including the Chief Justice, and that the said meeting was to influence the judges in the event of any election petition.

The A-G averred that the comments by Bennie were false and were meant to bring the Judiciary into disrepute.

Oheneba Boamah Bennie was released from prison on February 21, 2022.