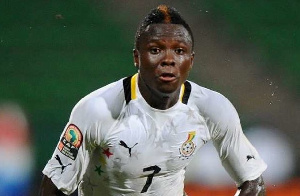 Former Asante Kotoko and Black Stars defender Samuel Inkoom has issued a disclaimer about a purported interview he granted claiming that the Kotoko CEO feels big to call him that is why he is heading towards Hearts of Oak.

Some media houses are circulating quoted purported to have come from the 32 year old defender but he says he has not granted any interview to any media houses today.

“Don’t blame me for my proposed move to Hearts of Oak, Kotoko CEO feels big to call me. So Kotoko fans should blame their CEO and not me.” this quote has been attributed to the former Ghana youth star.

Inkoom who played for Asante Kotoko in the early stages of his career before moving to FC Basel was linked to his former side but it appears nothing came out of those rumours.

The defender started training with Hearts on Tuesday with the view of signing for them if he should impress the technical team.

My attention has been drawn to a news item circulating to the effect that I have accused the CEO of Asante Kotoko of feeling too big to call me and hence the kotoko fans should blame him for my proposed move to Hearts of Oak.

Kindly disregard any such report as I have not granted any interview with any media outlet today.

I urge all to disregard this malicious report.

I only began training with Hearts of Oak today and have not granted any interview with any media outlet on the subject matter, I therefore find this report as shocking and unfortunate.