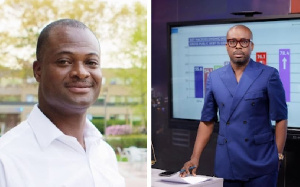 Paul Adom-Otchere, host of Good Evening Ghana, has chastised Prof. Raymond Atuguba over his recent comments that the current economic situation in the country could trigger a coup.

According to him, such comments are lies and propaganda influenced by evil and serious people like the law professor should not be engaging in such lies.

Doing a touchscreen presentation on his show on Tuesday, March 1, 2022, Adom-Otchere stated that the law professor was part of John Mahama’s government that presided over the worst economic crisis in the history of Ghana yet there was no coup during that time.

“You Dr. Atuguba, you were a member of John Mahama’s cabinet [in 2013 at a time the cedi was ranked worst currency in Africa]. This was an economic crisis not occasioned by COVID but occasioned by pure mismanagement of the economy and ineptitude …

“Dr Atuguba, you were sitting in John Mahama’s cabinet, no COVID, nothing and this is what you gave us in 2013; did you call for a coup at that time? Did you know then that when there is economic hardship there will be coup?

“Dean of the Faculty of Law says that the reasons why there is a coup is economic hardship, you have been Executive Secretary in the cabinet of a government that presided over one of the worst economic hardships in the history of the country without global pandemic, nothing. You inherited the economy from yourself…and after five years of managing the economy, this is what you gave us. There was no pandemic anywhere nothing to occasion this kind of thing apart from gross ineptitude and accelerated mismanagement…nobody called for coup in 2013; the opposition NPP never called for coup at that time…,” he stated.

“When you presided over the darkest part of Ghana’s history – dumsor – as a result of lack of financing, not just that, you left the economy and gave us a bill of $1billion every year since 2017 for take or pay…the Finance Ministry needs to look for $1billion to pay for energy that was signed by John Mahama administration that we don’t need because the energy companies wanted comfort so they said that you take it or you pay…”

He later told the professor to bow down his head in shame because linking economic hardships to a coup d’état is the most horrible, horrendous and inappropriate statement from a person of his stature.

“You broke all the economic bottles and glasses in the Jubilee House; everything was broken. No COVID, nothing…Dr Atuguba did anybody say we should go and do coup when you and your administration put off the lights for years and the economy was down for years, did anybody say coup?” he quizzed.

Turning to Prof. Raymond Atuguba’s photo on his touchscreen, Adom-Otchere advised the law professor to repent and not to do that again.

Professor Raymond Atuguba, at a public forum in Accra, referenced one Samuel Huntington’s PhD thesis and said the current economic situation could trigger a coup.

“We do not want a coup in this country yet I fear that if we do not act quickly, we may have one on our hands very soon. A former colleague doctoral PhD student wrote his dissertation also on Ghana.

“Naturally, our paths intersected and we have remained friends since. My friend’s PhD thesis was on the topic ‘Why certain coups succeed and why others fail;’ his case study was Ghana.

“My current assessment that Ghana may be ripe for a coup partly springs from the knowledge I gained from accompanying my friend through part of his doctoral research on this topic.

“It does not help matters when we consider Samuel Huntington’s thesis on the snowballing effect of coups in the sub-region and the closeness of recent coups to home. A big part of why certain coups succeed and others fail is the economy. What is the state of Ghana’s economy today?” Prof. Atuguba questioned.