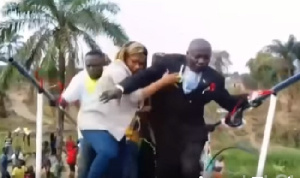 The bridge that collapsed in the Democratic Republic of Congo, DRC, which video has gone viral on social media is being rebuilt, according to reports.

The footbridge, outside the DRC capital Kinshasa, collapsed into a river that it was supposed to help people in the area safely cross.

A BBC Africa LIVE report citing local media said, the charity group in behind the project has confirmed that reconstruction has begun on the footbridge that collapsed during its inauguration.

It is believed the footbridge was built by people who lacked the necessary skills and miscalculated the amount of cement needed in the concrete to make it strong enough, the BBC report added.

The organization, DJCEP charity, said the new footbridge will be built at the same site but that it would meet required safety standards.

The earlier structure is reported to have built by people who lacked the expertise hence the accident that occurred officials went to commission it.