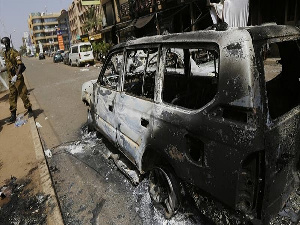 A 46-year-old commercial driver, Yakubu, has been shot and burnt to death by unknown assailants at Nakom, a community in the Pusiga District of the Upper East Region.

According to citinewsroom.com, Yakubu was plying his usual route, the Bawku-Cinkase route, when the gunmen attacked him.

Narrating the ordeal, a passenger who was in the car during the attack, said that the attackers blocked the road and forced the passengers out of Yakubu’s vehicle after shooting him.

“I was together with the man and three other people in the car. On our way back from our journey, we saw some men sitting by the roadside,” the passenger said.

The passenger, who is reported to be a female, said that she noticed the attacker following their car on motorbikes and warned the driver to park at a police checkpoint but he did not oblige.

“The guys crossed us and asked us to stop the car. They pulled out guns and told the man that it was his last day on earth. They shot him and shot him again and collected our bags and took our monies.”

“They asked us to run out of the car, leaving the dead body. They brought out a gallon of petrol and poured it on the body and burned it together with the car,” she narrated.

The Ghana Police Service is yet to comment on the incident.