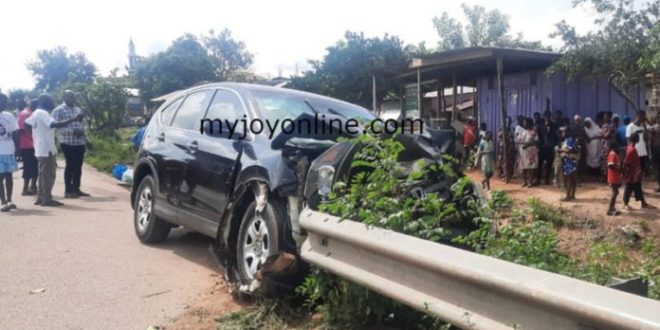 The driver, who drove into pedestrians killing three brothers at Ejisu-Besease, has for the second time been remanded into police custody by the Ejisu District Magistrate Court.

Justice  Adjoyi, 30, crashed his Honda CR-V vehicle with registration number AS 2221-22 into Hamidu Mohammed, 62, Abdul Rahman Mohammed,50, and their brother in-law Masawudu Nacro, who were standing on shoulders of the road a week ago.

Police prosecutors say Adjoyi  did not exercise caution when he  dangerously overtook a vehicle ahead of him, lost control and killed his victims whilst driving on the Konongo – Ejisu section of the main Kumasi-Accra road.

Prosecutors on Tuesday  told the court presided over by His Worship Francis Asakeya Ana-am, a duplicate  case docket has been sent to the  Attorney- General’s  office for advice.

The Magistrate said he was remanding the accused for his own safety.

The accused is facing a charge of dangerous driving  contrary to Section One (One)  of the Road Traffic Act, ACT  683.

Relatives of the victims were missing in court for the second time.