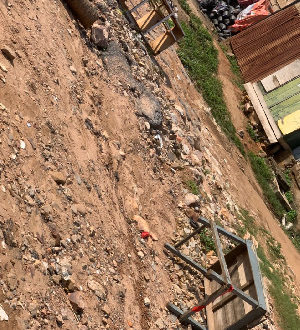 Residents of Santa Maria, a suburb in Greater Accra witnessed a strange phenomenon on Tuesday afternoon after an explosion occurred in some part of the area.

Assemblyman for the area Nana Kwasi Boandwoh, who spoke to GhanaWeb explained that he got wind of the incident in the afternoon after which he rushed to the place where it happened.

Upon reaching the scene, he was told there was a loud bang and something from beneath the ground exploded.
According to him, a trader who wasn’t lucky, got caught in it and badly hurt on her toes in the process.

“I had a call that something got burst underground like a dynamite, like the whole area – very loud, the area got to hear it and they called me. There is this woman who sells groundnuts. She was passing by and all of sudden, when it happened that way, she got hurt. The five toenails got spoilt at the spot, with blood oozing out like that,” he said.

The Assemblyman further explained that they have since not been able to ascertain what happened, or from where the explosion came especially because there is no facility close-by that could be traced as the source.

Nana Kwasi has since called on authorities to come to their aid as residents in the area, Anchor of Hope, are confused. Meanwhile, the affected trader has since been rushed to the Anyaa Polyclinic where she currently is receiving treatment.

“We can’t figure out what exactly happened: either from underground or whatever,” he said.

“We are all confused and we’re waiting for the police or whatever to come and give us the exact issue that happened in the area. So, we need assistance from agencies that can help us; probably the energy commission so that we can figure out what happened,” he said.