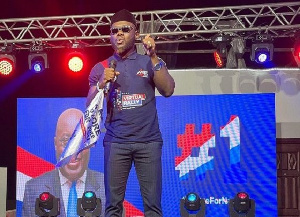 Multiple award-winning Ghanaian actor, Prince David Osei has revealed that he was not paid by anyone within or outside the ruling New Patriotic Party (NPP) for his open endorsement and campaigns for Prez. Akufo-Addo in the 2020 election, MyNewsGh.com reports.

Speaking in an exclusive interview on Kumasi-based Pure FM with host, Hammer Nti on the station’s flagship entertainment program, ‘Hammer Time’ monitored by MyNewsGh.com, the celebrated actor revealed that he openly campaigned for President Akufo-Addo because of his mother’s love and his personal like for the President insisting he wasn’t given any form of money to do the things he did as it was rather speculated.

“You can’t explain yourself to everybody so sometimes, you let it slide. Hammer, I hear people say I was given huge sums of money to endorse and campaign for President Akufo-Addo and all.

It’s just funny, nobody gave me anything during the campaign. I did what I did because I love Nana Addo and in my family, my mother, my dad and all my siblings all have a great love for the man so it was just pure love for the man, Nana Addo.”

Prince David Osei however hinted that he harbours political ambitions and will soon become a full-time politician in the country.