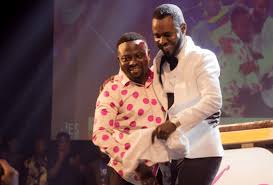 Brother Sammy has never been my boss, says Ernest Opoku

Popular Ghanaian singer, Ernest Opoku has shot down claims that he was trained and nurtured by Brother Sammy.

The ‘Onyame a Otease’ hitmaker during a discussion on UTV’s United Showbiz on December 11, 2021, said assertions he once understudied Brother Sammy and through that even managed to sing like him are untrue.

One can recall that Brother Sammy earlier lamented on the same platform that Ernest has failed to accord him the needed respect despite his enormous contribution to Ernest Opoku’s music career.

“Ernest was my son. He called me daddy. I used to love him. I have raised a lot of worshippers who sing just like me. Enter some churches and see, you will identify at least one person who sings like me. I used to take Ernest along with me to programmes. On Ernest Opoku’s first album, he sounded like Oware Junior. He started sounding like me when he was understudying me. He had an opportunity to get a producer and commercialize his music before me so he became popular than me,” Brother Sammy claimed.

But responding to ‘The Nation Worshipper’s, Ernest Opoku has asked Ghanaians to disregard the claim, adding that Brother Sammy usually spews lies just to trend.

“Most of the things Brother Sammy says are lies. He just says them to trend. I came out in 2005 way before him so what makes me his boy. I even released my first song, Onyame a otease in 2005. He is too playful and should not be taken seriously with some of his utterances. Brother Sammy plays like a small child,” Ernest told Nana Ama McBrown.

When asked what their current relationship looks like, Ernest Opoku said;

“We are cool. We don’t have any problem. Just that he likes to play too much.”