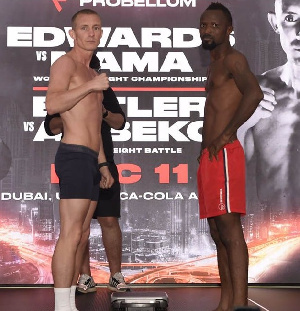 The bout which was slated for Saturday was called off in the eleventh hour. Probellum did not give any reason the fight had to be cancelled after the Ghanaian had been flown to Dubai for the fight.

Agbeko and Butler had made their weights for the bout on Friday.

John Riel Casimero, the WBO bantamweight title holder, was expected to make a defense against Paul Butler, but Casimero pulled out of the fight due to health issues.

Organizers of the bout later set up a fight between Paul Butler against Joseph Agbeko to find an interim winner for the WBO bantamweight title.

The bout which was due to take place at the Coca-Cola Arena in Dubai, would have seen the winner receive a shot at WBO bantamweight titlist John Riel Casimero or even a straightaway upgrade to full champion status.

While anticipation was high Probellum, the promoter, revealed through his social media account that, “The WBO Interim bantamweight title fight between Paul Butler and Joseph Agbeko will no longer be taking place on tonight’s event.”

Unconfirmed reports has it that Paul Butler was no longer interested in the fight against Agbeko anymore after it became known that he was no longer challenging for the full title.

Agbeko was expected to take on Butler earlier in June 2021 when the WBO title was vacant but that bout was also cancelled in the last hour.

What has happened to Partey and other African stars at Arsenal?