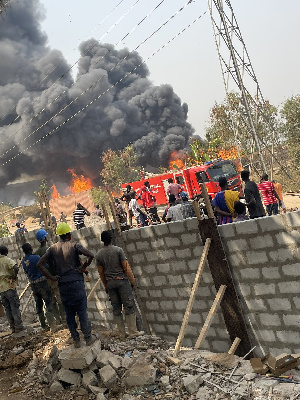 Explosion at Kaase as fuel tanker goes up in flames

Several dead, others with multiple at Apiate after explosion

According to multiple reports, the incident is a result of a fuel tanker catching fire while enroute for a delivery.

It is not yet known what caused the fire or if any casualties have emerged from the incident. However videos shared on social media indicate that the tanker burned completely with the fire extending to places nearby.

Some of the videos show members of the Kaase community making effort to stop the spread of the fire including throwing sand on the fuel tanker which had leaked and was extending away from the accident scene.

The incident comes just a day after a vehicle carrying mining explosives was involved in an accident leading to several deaths and injuries.

An accident involving the transport vehicle, a tricycle and a motorbike led to a fire situation which caused the explosion.

So far, some 13 deaths have been recorded with several others said to have suffered various degrees of injuries.