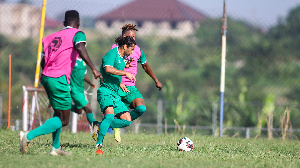 The duo watched from the stands over the past weekend when the Porcupine Warriors club whipped Accra Lions FC 2-1 in a matchday 17 encounter of the ongoing Ghana Premier League season.

The injured duo before the Accra Lions game managed to recover to start some light training.

Although that has continued this week, both Fabio Gama and Isaac Oppong are in no shape to play as of yet.

Due to this, manager Prosper Narteh Ogum is preparing for his team’s big clash against rivals Hearts of Oak without the two attackers in mind.

Although the gaffer has seen improvement in the shape and fitness of the two players in the last 24 hours, he does not want to force their return to the pitch to avoid further complications.

The much-anticipated super clash between Hearts of Oak and Asante Kotoko will be played on Sunday, February 20, 2022.

The encounter is scheduled to kick off at 15:00GMT at the Accra Sports Stadium.

Previous State oppose release of Medikal’s pistol
Next Can’t you take a picture without turning your back? – Fan roasts Hajia Bintu over Val’s Day photos