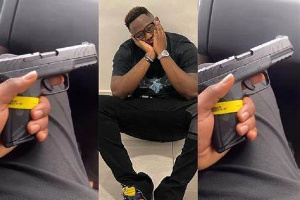 The said gun was confiscated by the Police after Medikal allegedly displayed it on social media.

His Lawyers had filed an application for the release of the weapon.

When sitting resumed at an Accra Circuit Court, Mr Adu Gyamfi an Assistant State Attorney argued that the gun in question was the subject matter of the offence of which the accused had been charged.

He said the release of the gun will interfere in evidence before the court as such it should not be released to the accused person.

He said the accused person has not demonstrated to the court enough as to why the gun should be released to him.

Mr Bobie Banson, Lawyer for Medikal, contended that the Police are in possession of the gun without an order from the court.

He recalled that, under the law, his client was obliged to possess the said gun to protect himself and his family.

Mr Banson said his client had obtained the pistol lawfully and had a permit for it.

He said ownership of a gun is not a crime.

According to Defence Counsel, the accused if attacked will not have any means to protect himself.

Mr Banson said the said pistol has a license covering it and the police have not indicated their intention of bringing same to court as photographs taken of the said gun.

“Continuous detention of the pistol is in breach of the constitution that is his right to safety and safety of his family,” he said.

Court presided over by Mr Essandoh has adjourned to February 21 to deliver its ruling.

Medikal, a renowned rapper has been charged for allegedly displacing a Ruger 99mm pistol on social media.

The prosecution case was that, on Sept 26, 2021, the video of the accused displaying the gun on social media went viral.

On October 21, 2021, based on intelligence, the accused was arrested.

Accused admitted the offence in his caution statement.