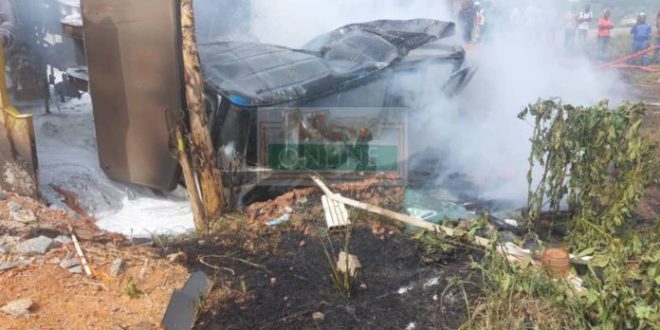 Family members of one of the victims of Asem Asa accident in the Western Region have expressed concerns over the body of their relative.

According to them, the police are refusing to hand over the charred body of their relative despite completing all necessary procedures.

Speaking exclusively on Asempa FM’s Ekosii Sen show three weeks after the unfortunate incident, a disgruntled family member, Enyam Djah, said the family is saddened about the latest development as they are unable to go ahead with the planned burial.

According to him, the police have refused to release the body to them for the reason that they are to complete a DNA test on all the female bodies before they are released to families.

A development, Mr Djah said is a waste of time, adding the family is running out of patience as they have been able to identify their relative who happens to be his brother.

“The argument of the Police is that it is more of law than the emotions we are attaching to the issue. They are saying that until all families identify their bodies, they are not releasing any of the bodies and so we agreed with them. So we gave them a week in which all-male bodies were identified so that should be enough for the release of the bodies.

“But again, they are also making another argument that once a DNA test is being carried on the female bodies, there is no way they can release any of the bodies,” he said.

Mr Djah said the position of the deceased in the family is very important and that as long as he remains at the morgue, it withholds every activity and they will continue to be in pain.

“We cannot stretch the pain too long. The early burial will ease the pain of the family and so we feel the body is released to us as soon as possible because we have fixed the date for the funeral for 23rd April 2022 and we had even wanted to convey the body to Volta,” he added.

Mr Djah said his brother, 48, was into mechanical engineering and he was going to supervise work at Swedru when he died in the accident

To him, the family believes the accident was such a mysterious one, adding that his death cannot be natural but will not speak further on the matter.

He said if they are unable to go through the processes to get the body, they may have to postpone the funeral.

Some 14 passengers on the Accra-bound vehicle were burnt to death at Asem Asa in the Western Region.

Eyewitnesses narrated that a tipper truck did a wrong overtaking.

Upon realising the careless driving on the part of his counterpart, the driver of the Ford vehicle stopped to make way for the truck.

But the truck’s driver lost control of his vehicle as a result of a tyre burst during the process, fell on the Ford and caught fire.