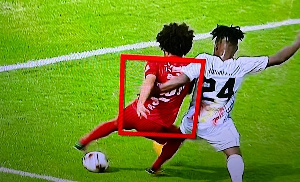 Hearts of Oak have lodged a complaint with the Ghana Football Association (GFA) regarding the performance of referee Kenny Padi, whose decisions they believe influenced the outcome of their Ghana Premier League match against Asante Kotoko on Sunday.

The Phobians were defeated 1-0 in the Super Clash after conceding a contentious penalty in the first half, which was converted by Cameroonian striker Mbella Etouga.

Padi ruled 15 minutes into the game that Abdulaziz Nurudeen of Hearts of Oak fouled Brazilian Fabio Gama in the box. Hearts have blamed the controversial decision for their loss and reported the referee to the GFA.

“The complaint was lodged with the Ghana Football Association on Monday, April 11, 2022. The import of our plea is to pray on the Review Committee to take a second look at the CONTROVERSIAL PENALTY awarded against the club. Management is disheartened by referee Padi’s poor judgement which subsequently caused us to lose the game,” Hearts of Oak said in a statement.

“Hearts are accordingly requesting the Review Committee to take immediate action to serve as a deterrent to all other future match officials who exercise such indiscretion against any club, especially at this critical period that we are all striving hard to bring back the love of the game.”

Following the defeat, Hearts are 16 points behind league leaders Kotoko.