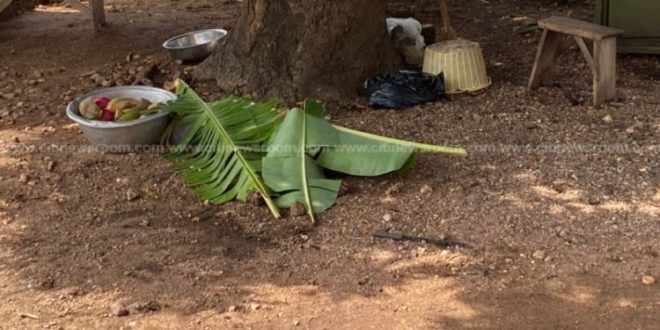 A Delegation from the family of the late Emmanuel Torli, a 17-year coconut seller who was struck by lightning in Ho on Monday, has been sent to Nogokpo, a shrine at Ketu South Municipality.

One Mr Nicolas Nfodjo, who described himself as a grandfather of the deceased, disclosed this to the media that the delegation was sent to the shrine on Tuesday to find out what led to the lightning incident.

He said the family believed the shrine would give knowledge of what happened and would provide appropriate steps to be taken to convey the body.

Mr Aaron Kofi Amedzo, Ho Municipal Environmental Health Officer, who was at the scene with his officers told the media his outfit was making efforts to contact family members to convey the body from the scene.

He said the rumour in the air was that the incidence had some spiritual dimension, the reason the body was still left at the scene.

“When we explain the scientific aspect of the incident to them in a respectful manner, I believe they will listen to us,” he said, noting that it was important to convey the body before it begins to decompose.

The deceased, Emmanuel Torli, a student of the Sokode Senior High School, was struck to death during a sparse rainfall around 1630 hours at a point opposite the Regional Office of the Electricity Company of Ghana under a mango tree, where he used to ply his trade.

According to eyewitnesses, the deceased, who was hawking coconut by the roadside as he normally does after school hours and on weekends, was left dead on the trail by a loud lightning strike.

Two other persons who were carrying out their economic business near the victim were also affected by the force of the lightning and were conveyed by personnel of the Ambulance Service for medical attention.

Hospital sources said they were recuperating at the Ho Municipal hospital, while the body of the deceased was still lying in a position covered with plantain leaves.

Deaths caused by lightning could be because of the wrath of a thunder god, the reason for consultation by the deceased family.

This seems to have been reinforced in a post on the official Facebook page of the Nogokpo Shrine, a popular deity.

The shrine reacted to media inquest saying, ‘There is a thunder God that strikes, and it is true. It is never a superstition.’